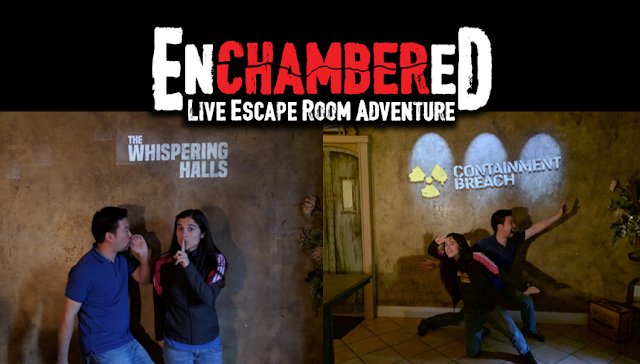 Enchambered is often hailed as the best escape room in Sacramento. We did both rooms here and as most reviewers have said, the production value was top notch. The puzzles were solid and the themes, although common, worked out well. All the rooms are open to the public, so everyone who books the same timeslot will be mixed together. The physical spacing of the rooms relative to the number of people was a downside which should not be overlooked.

We played "The Whispering Halls" with 12 people from three separate groups. Everybody was cool and competent which is always good for a public game. It started off with almost everybody shoulder to shoulder and there were a few other narrow spots in which some bigger people were not able to enter. The immersive environment and automation was incredible, props to the team who designed the room.

There was a crucial hall towards the end that apparently had multiple reveals that only three or four people experienced. We say apparently as we both tried to get a peek several times and given that it was a narrow space, we couldn't see a thing. If the design was made so that the entire group could experience the most epic reveals, it would be much more fun. At the end, we were explained how to solve the final puzzle which had a reveal and we asked if it could be shown to us and we were refused because another group was coming shortly. We were slightly disappointed as that meant we couldn't see the final "aha" moment.

"Containment Breach" was interesting as we were the ones crashing a teenager's birthday party. We were eight people (the max) in the room and again thought the puzzles were well done. Eight is about the limit in which you can still see most puzzles so we thoroughly enjoyed this room. The puzzles blended in well with the theme and it was a very enjoyable experience. One downside was the hint mechanism only allowed one person to receive the clue which was interpreted incorrectly and threw us off course.

In both rooms, we were given only one "boogie board" which is basically a digital notepad. The problem was that there were multiple puzzles that could be solved at the same time that needed the notepad so we essentially had to wait a while for a group to be done before we could do anything. This was an unnecessary bottleneck and could easily be fixed.

We understand that +70% of escape roomers are not enthusiasts and the newbies in the group echoed the sentiment that there were too many people. Enchambered is popular so you don't have a choice but to play with the max number of people unless you're willing to pay $70/person. It makes business sense to maximize revenue but I would say half the people in "The Whispering Halls" session came out slightly disappointed about the overcrowdedness. I think that as the industry matures, people will tend to stray away from the public rooms.

Overall, the quality of the rooms were great and we highly recommend playing the rooms with six people, although the cost would be double. This would increase the Overall Rating by one star.

Pros: Awesome visuals and automation, immersive experience
Cons: Too many people in the rooms, impossible for everyone to enjoy the final reveals due to lack of physical space (The Whispering Halls) and inefficient hint mechanism (Containment Breach). Not enough notepads, causing groups to twiddle their thumbs as they wait
See their website here: https://www.enchambered.com
Posted by Randy at 8:23 AM