We had the pleasure of interviewing Janell Woodbury, owner/designer of Exit Strategy Games in Sacramento. Janell's background is pretty different from our last interviewee, Richard from ETA, and it's amazing how diverse people are in this industry.

Let's start easy. Any hobbies or things that you are passionate about outside of escape rooms?

When did you first play an escape room and how was that experience? What got you hooked?

August 2015, I was in Louisiana on vacation.  I had heard of an escape room before, but the picture I saw of an escape room just looked like a boring classroom with some paper on the floor and some pulled out drawers.  It was something that was in the back of my mind to look into but I had not gotten around to it and that picture didn't seem that intriguing.  When we asked the hotel concierge in Baton Rouge, Louisiana, for suggestions on what to do in the local area, he told us about 13th Gate Escape.  I convinced my friends to go and so we checked it out.  We did the Collector, which is a serial killer theme.  The creators of 13th Gate Escape are Haunted House guys so apparently they really knew how to create a great serial killer theme.  To this day, that was the absolute best escape room I've ever experienced.  That particular room has the best surprises and set design of any escape room I've ever done.  The challenge, the countdown clock, the set design, the thrill of the escape, all of it, hooked me on escape rooms from day one.

You have quite a distinct background. Can you tell us more about that?

I have an undergrad degree in business with a concentration in entrepreneurship, so it's only fitting that I own three businesses. At 20 years old my father and grandfather bought an investment retail store and asked me to run it, considering that's what I was going to school for. I seemed like an obvious choice to run the business.  However, it was struggling, and I felt my ideas to grow the business were being severely limited, and I felt that I knew better than anyone else, so after 1 1/2 years I bought out my grandfather and started calling all of the shots.  I grew the the business into a self sustaining business, hired the right people and then decided I wanted more of a career.  So once my retail store was profitable I headed off to law school.  I received a scholarship to a San Diego law school so I moved down there for a few years for school.  When I came back I started my own law practice.  The best and worst thing to ever happen to me was going to that escape room in August of 2015.  Once I went, I was obsessed with opening my own.  My father had an old warehouse that was partially empty and had been for years.  So I rented out some space about 13 months ago and opened up my own escape room at Exit Strategy Games.  So now I have three wildly different business ventures and I tell everyone that's because I have A.D.H.D. of businesses.

What was the first escape room you designed and how was that experience?

I designed an escape from a serial killer theme room entitled The Torture Chamber.  It was exhausting yet so fun.  From start to finish it took 5 weeks to build out and get open.  I was working 15 hour days, it was exhausting but also exciting.  It's a pretty low tech room and to this day it needs a lot of updating.  However, people seem to really like it because of the theme mixed with the unique setup that requires forced verbal communication.  I actually got caught by the city not having the right permits and I got shut down for three months.  After that, there were a lot of regulation and changes I had to make.  It was a very expensive process and it definitely took a lot of fun out of this business. But those first 5 weeks of wildly fast creation, building it out, and receiving so much positive feedback for the first few months we were open was an absolutely magical experience.

Originally my main goal was to eventually build a multi-level escape room with a slide.  My imaginary multi-million dollar escape room would definitely have multiple slides.  In this imaginationary world do I get to get rid of the fire code too? Haha! If I could get rid of the fire code, I'd have an amazing mix of an indoor obstacle course, adult playground, maze, and an escape room.  There would be multiple levels, stairs, and slides.  I've spent way too many hours daydreaming about this, and I haven't narrowed down the theme to just one, but it would either be themed to steampunk, Labyrinth (80's movie with David Bowie in spandex), or the Cube (90's movie where the characters ran from high tech killer cube room to high tech killer cube room in different colors, trying to escape). The room would look like a Hollywood movie set and it would have the most tech out of any escape room on the face of the planet.

Honorable Mention: Zoe, Escapade Games (more of an interactive experience than an escape room, only reason why it didn’t make it in my top 5)

Choose one experience and explain why: Puzzle heavy room vs. Immersive room with theatrics

Tricky question, but I'd go with immersive room with theatrics if I had to pick.  I also consider theatrics "tech" so hopefully I'm not off base here. If anyone has done the rooms on my list they'll see they range from high to low tech, and from average puzzles to excellent puzzles.  I either love the set design and theatrics so much, I can overlook some blah puzzles.  Or, I love the puzzles and fun experience so much, I can overlook the lack of theatrics or tech.  However, an incredibly heavy puzzle room like Palace Games (which is beloved by everyone), is actually exhausting to me and takes most of the fun out of the experience.  I like more simple fun games that make you think but not feel like a complete idiot.

What are the craziest things you have seen in an escape room as a gamemaster or player?

We have video of an inebriated player shoving our, "It was my fault" sign up her sweatshirt and walking out with it.  Believe it or not, we called her and she returned it later apologizing.  Also, we have two chain link fence gates in one of our rooms, a player disassembled half of one of the gates before we caught them and now we have to tell everyone not to disassemble our gates.  We also currently have a huge hole in the wall from a player kicking a hole in it.  Last but not least, it wasn't the "craziest" thing I've ever seen, but the most time consuming thing a player ever did was trace over an entire black light puzzle in regular black ink.  Painting over black light is nearly impossible without the right primer, and it cost a lot of time and money to find that right primer, and it literally took days to fix the problem.

Wouldn't it be cool if we could get a highlight reel after playing a room? More to catch the fun cheerful parts without spoilers.

Yeah, I've talked about that.  Without some kind of tech to do it, it seems very time consuming to put together though.

You meet an alien race with the opportunity to fly off with them. They seem benevolent but you are unsure if you will ever come back. Do you go or stay?

Stay! I really like my life, my family, my friends and my dog.  I'm sure the aliens are nice and all, but I'm pretty comfortable and happy where I'm at.

Thank you for your time Janell!
Posted by Randy at 8:51 PM No comments: 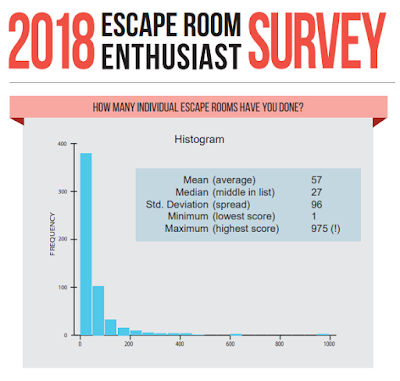 TheCodex.ca released the results of the 2018 Escape Room Enthusiast Survey today based on the responses from 562 people (up from 250 in 2017). Given that this was compiled as a pastime, it looks amazing and definitely worth a read for anybody interested in how escape rooms enthusiasts think about various elements of the industry.

One of the more interesting stats is found below: 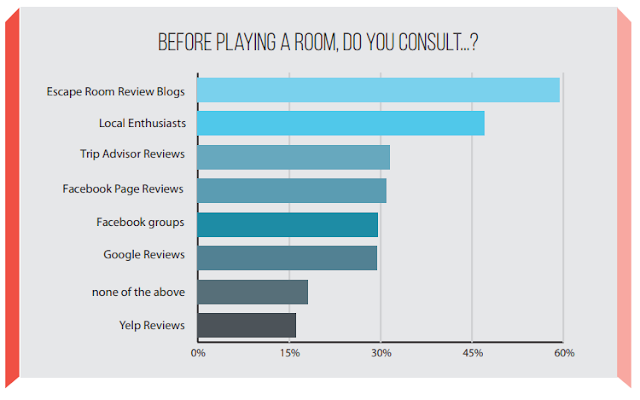 Normally, Yelp and Trip Advisor are the go-to resources for people in determining which rooms to play. Of course they are the most exhaustive but not necessarily the most reliable. The range of star ratings on Yelp is small, often almost all establishments fall between 4-5 stars making it difficult to tell the good from the bad so we highly recommend consulting enthusiast ratings in order to maximize your time to have the best possible experience.

Thanks to Lee-Fay and Errol for compiling this survey! 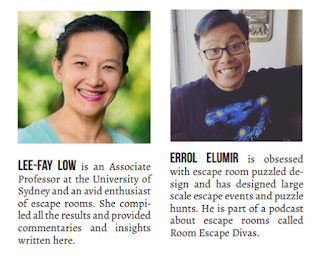 
Hatch Escapes was one of the new LA locations that opened up in 2018 and there was lot of hype about their game "Lab Rat". In June, I was in New Orleans on Room Escape Artist's Escape Immerse Explore Tour when Amanda (Queen of Escape Rooms) told me about Lab Rat and how it was one of her all-time favorite rooms out of +700 played. When someone of that stature says a game is good, you take it seriously, so I immediately booked a flight to LA for after the tour. (Actually, I already had it booked in advance but that doesn't the former sound much more exciting?)

Being a "rat" in a lab sounded pretty unique, so right off the bat, I was excited to see the room. From their site:

"Lab Rat takes place in a laboratory where giant rats are doing experiments on human beings, specifically you! The somewhat unhinged Ratkenstein, a doctoral student in the field of human intelligence (or, in his estimation, the lack thereof), has tasked you with completing a series of tests and puzzles. If you succeed, he can finally write his dissertation. If you fail, he’s going to put you and your friends in the old test-subject chipper (like a wood chipper, but for test subjects!). You’ll have one hour to complete the tests and attempt to get out of the laboratory for good, before Ratkenstein turns you into mulch!" 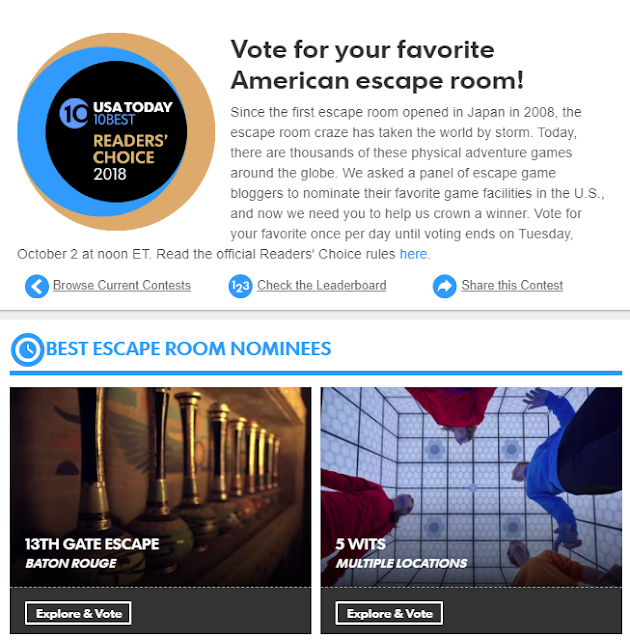 Escape Rumors is honored to be part of the nomination panel for the top escape room in the US. We played at 14 of the 20 escape room finalists and they can be found on our ratings page. You can also find full reviews for some these games below.

Vote for your favorite escape room on the 10best site here!