Evil Genius created a two chapter adventure that you can book in a single two hour slot. This was the first time we had seen such a scenario and we hoped that there would be a natural transition between the rooms. Chapter One came out a few years ago and they more recently added Chapter Two, so these rooms could also be played separately. When played in one session, teams can bank the extra time from Chapter One and put it toward Chapter Two and that's exactly what we did. The transition between the chapters was fun and the layout of the location also helped make it feel more immersive. 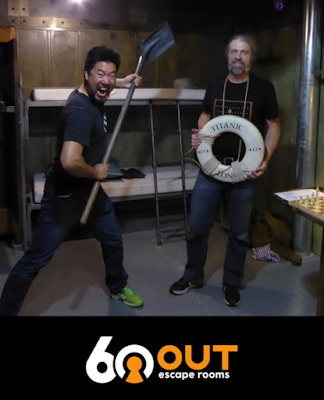 60out is often touted as having extremely high quality set designs and “Titanic” in particular is recommended on many escape room blogs. This company actually has a few locations in the LA area after some independent rooms were merged together so expect some variation in style between the different franchisees. "Titanic" and "Wizards Workshop" are at the Marina Del Ray location while "The Mystery of Senator Payne" was at Corinth spot. We also played Grandma's Masterplan at the Melrose location which was one of our favorite escape rooms of all time. We love tangible puzzles and beautiful set designs but we're aware that this alone doesn't make a great room.