The Escape Game is one of the largest corporate escape room companies in the world. Over the past two years, I played five of their games and if you are ever in one of the 17 cities they are present in, you should make an effort to stop by.  My favorite rooms were Special Ops and Playground and both were some of the top rooms I have ever played. We jumped at the opportunity to play a brand new, digital only game: TEG: Unlocked VOL 1 & 2. From their site:

"The Heist - Vol. 1: Chasing Hahn
Work as a secret agent to thwart the infamous art curator and suspected art thief, Vincent Hahn. You’ll need to uncover his true identity, connect him to a crime, and work with the International Police to finally exact justice. With the help of your Intelligence Agent, you’ll need to stop Hahn before another masterpiece goes missing. *This volume, “Chasing Hahn”, is a continuation of The Heist story, but you don’t need to play The Heist escape game first. The experience will be the same whether you’ve played The Heist or not.

The Heist - Vol. 2: The Silk Road:
Vincent Hahn just barely escaped, but Intel has noticed some suspicious activity in Hong Kong. According to reports, Hahn is dealing with artifacts related to the Silk Road. Your mission is to go there, find Hahn, and capture him before he can get away. "

The format of these games were as per the below: 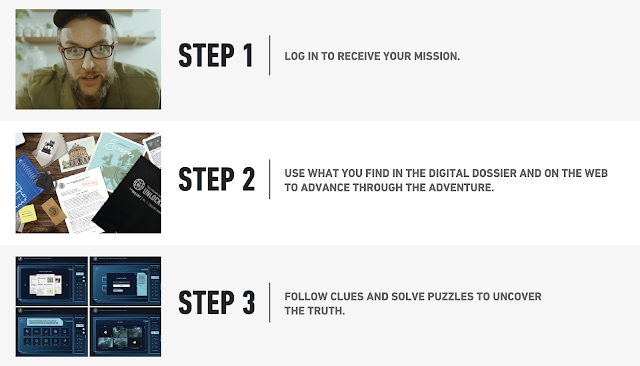 The dossier was comprised of PDF files that acted as the evidence from the heist. There were quite a few files to go through and the game utilized an online terminal to verify your solutions to various puzzles. As you correctly determine answers to the mission, things opened up and you are granted access to more material to study.

The Dashboard interface was slick and it reminded me of the what I have seen in one of their physical escape rooms. Think of it like something that you would see in a Mission:Impossible movie. Here is their trailer to give you an idea of how the game looks:

Vol. 1 was actually a physical kit that went sent out to people and then digitized and offered online.  The puzzles were focused on examining evidence from a crime scene and somewhat similar to what you would find in a standard escape room that had paper puzzles. The overall gameplay was definitely not as exciting as a physical room and going into it knowing this would help set expectations.

I believe that Vol. 2 was conceptualized as a digital only game which was why we felt that it was a lot stronger in terms of immersion and gameplay. There were some interesting puzzles that involved multimedia elements that really made it a lot of fun. We enjoyed the presentation and the flow quite a bit.

Vol. 2 was definitely an improvement on its predecessor and the way that the story unraveled with the use of video was very clever. It seems so real despite not having a live person acting in the game! The feeling of being a remote secret agent and working with field agents was fantastic!

There was an instance in Volume 1 where outside knowledge was needed and it was not known to the group until we were forced to take a hint. I think we spent a good 20 minutes trying to figure it out and it was pretty frustrating to find out that we had to Google the answer.

In Volume 2, we almost missed a critical segment of the story by pressing the "back" button on the browser. We tried to go forward but the story was gone and we were able to get it back by going into incognito mode. Phew!

Online games are definitely not the same as physical but for $10, we highly recommend playing Vol 2.