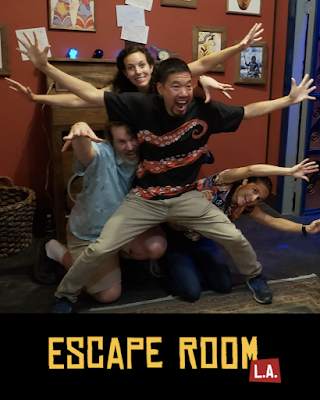 Escape Room LA is known for having some pretty great puzzle content in a really beautiful space. The first game that we played there a few years back was "The Alchemist" and the parallel puzzle tracks kept the four of us busy until the end. Last year we played "The Pyramid", which had a much more elaborate environment and once again we were busy puzzling right up until the end. I'm glad to say that the progression from their oldest to their newest room has continued to improve as both the immersion and puzzles were fantastic for Atlantis. The one thing that could vary your experience is the fact that these are public rooms. From their website:

"An invitation from an eccentric professor leads you through a secret portal into the fabled lost city of Atlantis. As you search among the ruins, you’ll solve mysterious clues and puzzles, while discovering the long-lost pieces of Poseidon’s fabled trident. Find all of the pieces and escape before your air supply runs out! Set out on the adventure of a lifetime as you explore the spectacular underwater world of Atlantis!"

The game started off in an ordinary study but the escape room is called Atlantis so it's not really a spoiler to say that your journey will become much more exciting. As we delved into Atlantis, it was apparent that the creators had some great ideas on how to create a convincing "underwater" environment in a rather large footprint. Like other Escape Room LA games, there were parallel puzzle tracks so if you play with strangers (we were lucky no one else booked) you might not know what went on for a good chunk of the game. The puzzles consisted of a lot of symbol matching and were thematic with the storyline.

Walking into Atlantis was such a joy!

The first act of the room is extremely ordinary. While this can make the latter part of the game much more exiting, it would be nice to have the start of the game to be as impressive as the rest of the game.

Once again Escape Room LA has created a really fun experience with some solid puzzling in a great environment. If you can book an early slot with your own group, you will have a great time with the variety of puzzles and the cool theme.