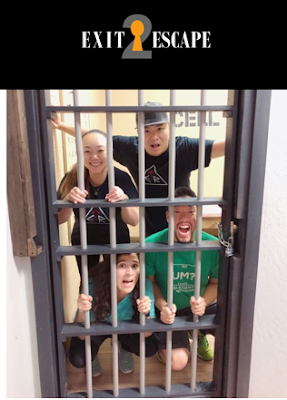 We heard that EscapeTheRoomers were in town so we teamed up with them to play Exit2Escape's newest room, the "Wild Western Jail Escape". This is Exist2Escape's last room before moving out of their Dublin location and into a new place in Pleasanton which is about 15 mins away. From their site:

"You and your gang of bandits have been terrorizing the town of Tumbleweed for years! You’ve managed a clean get-a-way on all your wrong doings… But it looks like the Sheriff has finally caught you! He claims he has evidence to prove it was you and your gang that robbed the Bank, and he has you locked-up behind bars! You want out of jail fast, and you want to know how he got his information.

While the Sheriff and his Deputies are out celebrating your capture, you decide it’s now or never… You have 60 minutes to break-out, find and dispose of the evidence, then uncover the yellow-belly who ratted out your gang!."

Similar to their other rooms, the puzzles were smart and creative. The build was not quite as elaborate as the other games due to the fact that they are going to be moving location but the puzzles were satisfying and logical. The game started off in split groups, which can be polarizing but given you can see the other group and help out, it was fine.

This is likely the purest form of a first generation escape room that isn't fancy but executes on the basics really well. It was surprising to learn that this was their most difficult room but we still think it's good for all players.

There were multiple "a-ha" moments that make for some real fun and that will make an impression on you!

The set design was average so perhaps if this game were to be updated in the new Pleasanton location, it might be more polished.

Exit2Escape always has solid puzzle design with a homemade feel. If you are in the area, you should check out this room!

Disclosure: Exit2Escape comped the ticket for this game.