Over the course of this crazy year, we had the opportunity to play a few more online escape rooms, in addition to some great ones like "The Truth About Edith" and "The Ruins" earlier this year. Here is our recap of new games played

Lost Escape: The Steampunk Adventure (Lithuania)
This was a physical room that was available for online play via an avatar who was extremely friendly and welcoming. Prior to playing the game, we were sent an email with some images that provided a closer look at some elements in the actual room. While the gameplay was standard for a linear escape room, the contraptions and steampunk devices were just wonderful to see and "play" with. It was one of those rooms that would have been great to play in person because of all of the tactile puzzles (no padlocks) and cool gadgets to fiddle around with. There were some nice special effects (again, wish we saw them in person) and you could the passion that the creators had in producing a nicely polished game.
The Steampunk Adventure game transports you into an immersive world with tons of delightful and interactive mechanical devices. To top it off, we had a superb Avatar that perfectly helped us along the way and we can't wait to play their next adventure! 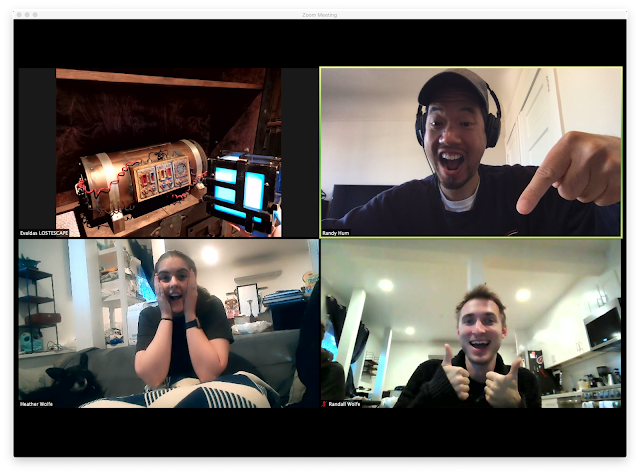 Agent November: Virtual X-Caper (London, UK)
Based on previous experiences, I believe that games in London always have great actors. This could be due to either of the following reasons: Actors are London's greatest export / Anyone with a British accent sounds prestigious. Virtual X-Caper was no exception as the actor in this game was brilliant in a comedic and whimsical fashion. The game starts off with you seeing/hearing everything that your avatar sees and they did a great job in making us feel that we were in his head.
As you might have guessed, the highlight of this game was the actor interaction that took place in what was otherwise a basic set and a common spy theme. Sometimes we would laugh as our spy proceeded to be silly while in the back of our minds we wanted to shout out "we don't have time for this you fool!". There were a decent amount of padlocks to open, paper puzzles to solve, some meta video games nods and some nice touches of real life elements. While this game might be a bit on the lighter side for puzzlers, I think that anyone with a good sense of humor will appreciate the game for what it is. I tend to prefer immersion over puzzles and I quite thoroughly enjoyed this experience because of the puns and the witty character at hand.
If you are looking for a lighthearted, witty and genuinely hilarious online escape room, you should definitely play Virtual X-Caper! Can we have more of Agent November please? 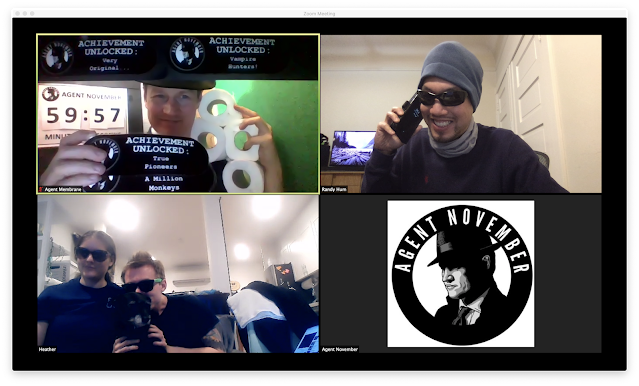 Omescape : Pursuit of The Assassin Artist (Sunnyvale, CA)
This is another really fascinating online only game where we had a video game-like mechanic of having "multiple lives". The decisions we made could lead to our Avatar's death and the game would start over from scratch and we'd have to repeat our actions in order to advance again. The element of role-playing was big so if you are into that, you would definitely like this game. While the puzzles were not overly complex, there were a few times where we had to do things that are not permissible in an actual escape room. Overall, the unique format and the great dynamics of having two actors makes this a great room if you could swallow the price tag of $190/game.
Pursuit of The Assassin Artist delivers a top of class experience with a novel game mechanic that will reset your expectations of an online escape room! 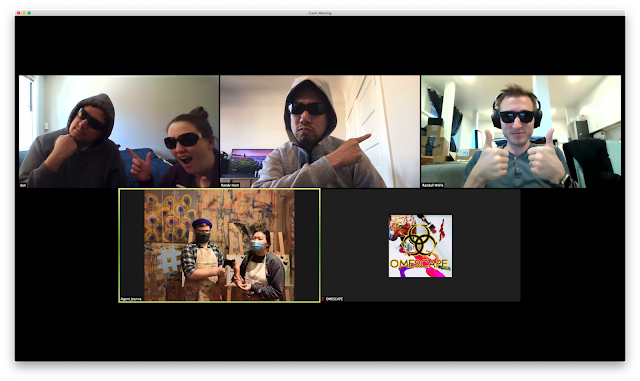 60out : Orion's Ridiculous Revenge (Los Angeles, CA)
This was a free game offered by 60out and was a mix of a point-and-click game with cut scenes that were used to move the story along. There was a live game master that helped with setting everything up but was for the most part not part of the game. At first when I heard about the format, I had my doubts but the game was well done and funny if you are ok with some raunchy humor. There were a lot of adult-only references so keep that in mind if you are thinking about playing this game. We had a lot of laughs and your enjoyment will be a lot more dependent on who you play even with compared to other games. At times, we could fast tracked our way through or half-heartedly play along with some of the sillier elements but we were all fully engaged!
Society of Curiosities : Mysterious Map Heist (Online/Physical)
We received an envelope in the mail that brought us on a treasure hunt for. The contents of the envelope were some paper puzzles and some clues to help find an artifact of some sort. What was really clever about this game was how they integrated real life concepts that blurred the line between game play and reality. One of the most gratifying aspects involved interacting with one of the characters in the game via actual text messaging. We didn't know if we were texting a bot or an actual person so we tried some off topic messages and it really felt like there was a real person on the other end. If we can't tell the difference, then does it really matter?

Image from societyofcuriosities.com
The Escape Game: Truth Seekers (Nashville, TN)
This game was a modified version of The Escape Game's "The Heist" room and a tie-in to a new show, "Truth Seekers, starring Simon Pegg and Nick Frost on Amazon Prime. Just like their other game (Ruins) that we played, we had a live avatar who took directions from the group and played through a physical room. The same 360 degree room view and inventory was used which really helped with any sort of motion sickness that one might experience. Our avatar was helpful and very professional and The Escape Game seems to always excel in this aspect. Overall, the game was pretty short (32 minutes) but a great entry into the world of online escape rooms.
Wild Hare Escapes: Serf's Quest (Online Only)
This retro-style point-and-click game was a parody of games like King's Quest. The 8-bit look along with the old school feeling were spot on. One of the highlights of this game was all the puns which gave the team a few good laughs. One room for improvement would be to automate hints with text boxes as opposed to having a live game master read them out to you. We were two remote groups that were essentially playing the game independently so any tasks that one group did, the other would have to backtrack and do the same.  This format would be better suited as a single player/connection game. 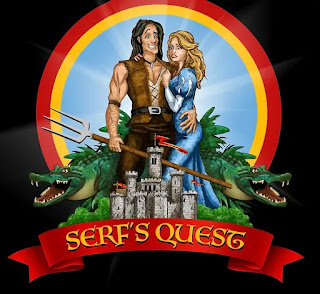 The Room VR: A Dark Matter (Oculus Quest)
This multiple award winning VR game was extremely polished and clean. So far, this game was the closest a virtual game could get in terms of replicating the feel of a physical escape room. While the old school theme wasn't one of my favorite, the game play was so gratifying and smooth that I kept getting sucked back into it.

We hope this post helps out anyone who is looking for some online escape rooms to play!
Note that some of the above games may have been complimentary to our team.
Posted by Randy at 3:21 PM No comments: