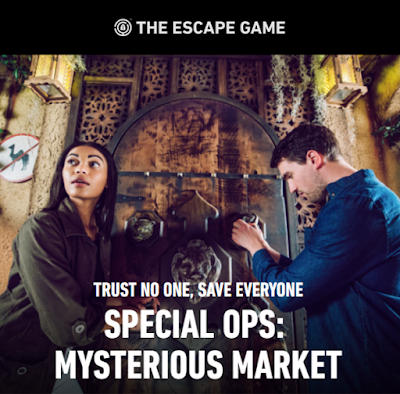 On a recent trip to Minneapolis, I found myself arriving at the airport late at night. With not many options available to me, I decided to solo a room at "The Escape Game" (aka "TEG"). TEG is a franchise with locations in 12 cities and plans to expand to another nine cities. I played all four games at their Houston location which were pretty solid. There were some worries in playing my first solo room because it's not as fun to miss out on parts of the game but I decided going hint heavy would help a lot. I played "Special Ops: Mysterious Market" and the below is from their site:

"It started as a routine operation. You and your fellow field agents were sent to investigate the area’s local market. It’s late, it’s quiet… but something’s not quite right. Just as you are about to wrap up your inspection, you encounter a twist you never expected. Should you have seen this coming?"

As a side note, TEG was located on the third floor at the "Mall Of America", right beside the airport. This indoor mall was huge and had a theme park situated in the center of it all! They even had a Tim Horton's and restaurants offered poutine so I guess Minneapolis has a lot of Canadian tourists.

The set, like other TEG games I played in the past, was spot on. There were nice touches that made the environment look realistic, all packaged in a physical space that was definitely above average in size.

The technology that was woven into the room towards the end of the game made me feel like I was in a movie. A few of the puzzles throughout the game were familiar to me and one of the final components was pretty novel. Puzzles varied from searching, mathematical and of course logical. There was no need for any physical exertion at all so players with any physical limitations would be fine in the room.

I really enjoyed how the game ramped up from a very ordinary start to a fun and cinematic-like final act. Knowing that I would need to leverage the help of the GM quite often, I decided to call her "operator" (this was a first for me). It felt a little like an episode from the TV series "24" where counter terrorist agents search for clues to stop the baddies from blowing up stuff. Think Jack Bauer liaising with Chloe for various intel on how to solve things. Playing solo, I had to make it unique! The GM was great. She was super helpful and knew exactly how to help me. I used to take customer service for granted but in a solo game, you really need a GM who is attentive.

I just watched the trailer for the room on their site. My suggestion (I also do this with movies) is DO NOT WATCH THE TRAILER. There are some spoilers like when you watch a movie trailer!

The technology enabled final sequences were a blast! If you're into secret agent movies, you will love it even more!

There were a few puzzles that were common and while not inherently "bad" and perhaps even novel for beginners, those who have played a few rooms will likely have seen some of the elements in other places.

Special Ops was a fun room that was polished and made excellent use of technology. This room was my favorite out of the five rooms I have played thus far at The Escape Game and I highly recommend playing it if you have the chance!

Disclosure: The Escape Game comped the ticket for this game.