Escape Games Canada was another Toronto escape room company that was highly recommended by escape room enthusiasts. There are two locations somewhat far away from the downtown core: one in Mississauga and one in North York. I was lucky enough to be staying close to their North York location (40 minutes north of downtown) where they have six, soon to be seven, escape rooms. I was expecting to have a great time with a bunch first timers by playing "Crossroads" and Syndicate: Relic Heist.

Fellow escape room enthusiasts Errol Elumir and Lee-Fay Low compiled an insightful survey about escape room players and owner. The below are  snippets of the survey and you can see the entire professionally done summary here. 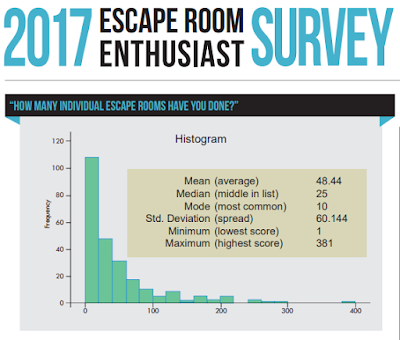 Secret City Adventures: The Secret of Station House No. 4 (Toronto, ON)


Secret City Adventures runs a couple of different escape rooms series ranging from the familiar franchised Real Escape Games rooms (Time Travel Lab) to what I presume to be their own creations, the Casa Loma Escape Series and The Murdoch Mysteries Escape Series.

I heard through word of mouth that the "The Secret of Station House No. 4" was a top escape room in Toronto so I bought my ticket and flew out to the land of hockey and maple syrup. One thing that I noticed was that a LOT of the top rooms in Toronto are geared towards large groups so it makes it difficult for travelers to plan ahead. From their site:

Step into a world of intrigue and wonder as Secret City Adventures & Shaftesbury bring the global hit television show Murdoch Mysteries to real life in the Murdoch Mysteries Escape Series, immersive escape games for all ages."

Although I had no idea what the Murdoch Mysteries TV show was all about, that didn't quite matter as the story was self contained and communicated by the actors in game.

While we were in the Orange County area we met up with some other enthusiasts and it was fun to play with people who are just as passionate as we are about escape rooms. Bill and the Krazy Katz joined us for this last minute booking late on a Saturday night. From the EscapeX site:

"Sixty years after the disappearance of the Cain family, prospective residents have come to the manor ... every one of them citing strange behavior in the household. Voices echo from the ceiling and footsteps go pitter-patter across the attic floors.

Though the manor has remained abandoned, those that dare enter the establishment report inexplicable chills that linger in the air and feelings of being followed. Some say the spirit of Master Cain remains trapped in the attic, doomed to stay in the house for all eternity.

Do you dare explore what lies in the attic?"