Crossroads Escape Games is consistently the number one recommended escape room company in Southern California and I put this location on our "must do" list for our Los Angeles/Anaheim trip. "The Hex Room" in particular, has a reputation of being a solid room with a strong storyline and immersive theme. "The Funhouse" is known to be a fun room, although better suited towards a younger audience. From their site:

The Funhouse: "Come one, come all! Step right up and see if you have what it takes to become a magnificent magician! In this room filled with trickery and illusions, you and your team will be put to the test. Work to beat the clock as you search for clues and solve mind boggling puzzles in a topsy turvy experience of a lifetime! Now all you need to do is ask yourself, do you have the wits of a magician?  Or are as clueless as a clown?"

The Hex Room: "Can you survive a horror film? This murderous horror movie fan wants to watch you try. Each player will take a quiz before the game to find out which character they are: The Nerd, Virgin, Jock, Rebel, Prom Queen, or Detective. Your team will be divided up into separate rooms where you must work individually and as a team. Not only do you need to escape, but you must also survive! Who will live? Who will die?​"

As we head towards the 80 games played mark, we become more appreciative of new themes. Given that a handful of themes (prison, bunker, lab, serial killer, castle...) seem to make up 90% of the market, it's not easy to find something vastly unique out there. Via word of mouth, we heard some good things about 60out's "Grandma's Masterplan" and the scenario looked different enough for us to put this on our "must-do" list for our LA trip. From their site:

"The story begins when your granny suddenly disappears without notice. No one has a clue where she is, but one day you come across a letter in which your grandmother reveals a secret about her inheritance. All you have to do is to go into her house and find it -- simple, right? We'll see about that." 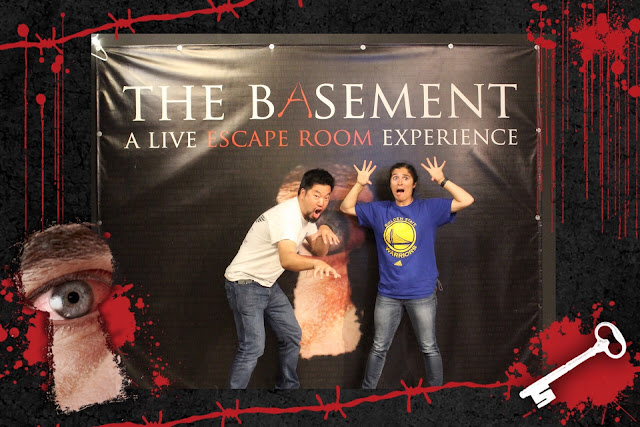 The Basement's "Boiler Room" was a 35 minute escape room and the last of the three scenarios we played at this highly talked about location. "The Study", which is their latest room, is currently one of our all-time favorite escape rooms and since the Las Vegas location didn't have the Boiler room, we ventured off to play it at the Sylmar location near Los Angeles.

The Boiler Room was physically confined. The max of four players would make it really uncomfortable and claustrophobic for a lot of people. Playing in such close quarters with strangers would also be equally awkward but we were lucky enough to only be a party of two.

After enjoying "The Time Travel Lab" at Quadra, we decided to try out their latest game, "Remote Chance". While this wasn't a SCRAP game (Quadra created their own) there were definitely influences in terms of style. Triggers were all done via in-game actors and the interaction was actually quite unique and creative.

Of course, the success rate was low, somewhere in the single digits and typical of a SCRAP-like game. We were in a public room and somehow they booked over the max of 12 players (there were 13). Our theory was that the group prior to our timeslot didn't have enough people so they put them with our timeslot. A bit underhanded as they didn't think to ask us beforehand about it. The story was as follows:

"Remote Chance is the latest movie from the great director Alan Smithee. It was unfortunately rushed through production and had a poor theatrical release. Alan Smithee decided to make a director's cut of his movie but passed away before he could finish. Luckily, he did leave behind clues in his office for someone to take up his work to complete filming and creating that director's cut."


Omescape's latest room, "The Sorcerer's Sanctum", was located in the same facility that has Pandemic and Dark Altar. Sorcerer's Sanctum was a polished game with automated puzzles and also one of the most challenging games, in a good way, at Omescape. We were the 67th team to play the game and only two had escaped so we knew this would be a challenge. The story was as follows:

"You and your friends have accidentally stepped into a house occupied by great magicians. Your team work will be crucial in helping you pass through a series of magical puzzles in order to escape from the spell in time!"

This escape room starts off with the team split into two rooms and while there wasn't that much in each room, they were sufficiently challenging enough to occupy both groups. As the game progressed, there were some fun reveals and some not so obvious puzzles that we could see people having a hard time with. While not totally unfair, you do have to pay attention to detail (surprise!) or risk being stuck on some riddles.

Quicksand's "The Diner" room had a unique diner (surprise!) theme which was refreshing to see. The decor, down to all the furniture, was spot on and there were some awesome elements that perfectly utilized good old fashioned props. There was a nice mix of fair puzzles that blended in well with the surroundings and storyline. The story was as follow:

"After a wild night at a mob bar a few decades ago, you took up with the wrong crowd and now you find yourself about to rob the local diner.  This isn't your first gig and you're hoping it won't be your last.  The boys didn't give much detail, but said the prep work is all set; just be in and out in less than an hour.  If you can pull it off, you'll be in the "Money Honey".  On the other hand, if you mess this one up, you'll be writing your own version of "Jailhouse Rock", ya dig?" 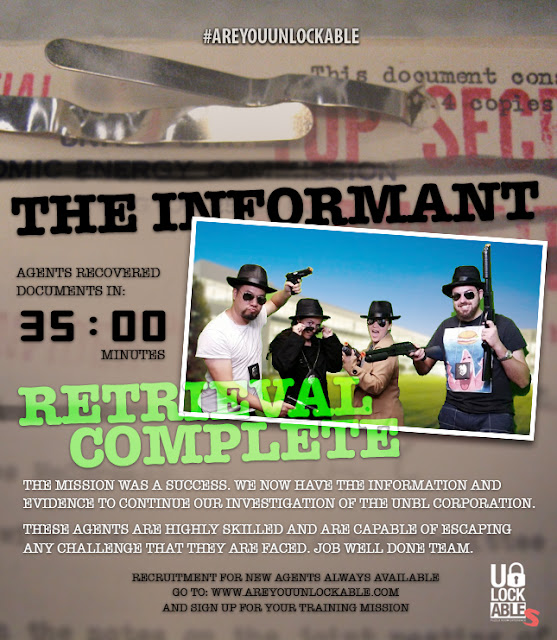 This post was written by Mio! The Unlockables is a relatively new set of rooms in San Diego with a very friendly owner/operator who is himself very well versed in playing escape rooms (+100 rooms). He actually took over part of the space from a previous operator so his own "The Escape" room was added in addition to the existing "Informant Room". As a result, the Informant Room makes for a pretty good introduction room for beginners, but will likely be a breeze for more advanced players. Even though it was your typical investigate a murder scene setting, it still was an above average game. "The Escape" room, on the other hand, is a great deal more immersive and challenging – one that our crew enjoyed a lot and kept us well occupied.

Steal and Escape's Mysterious Stranger was highly recommended by everybody as a "must do" room in San Diego. Located south of San Diego in National City, we made the trek to see what this room had to offer. The story was centered around breaking into some random dude's home in order to either save or end America as we know it.

The room had above average decor and there were a lot of things to solve. There were a few crafty puzzles that were quite fun and we appreciated them a lot. We also liked the heavy searching element of the game as that's exactly what we like to see in a escape room. The weird part about the room was that there were bottlenecks that made it hard to move about the space and we were constantly bumping into each other with four players in the game.