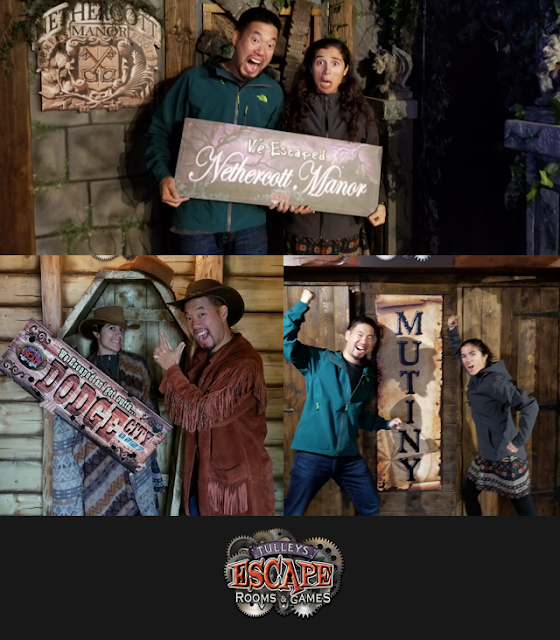 Located 10 minutes from Gatwick Airport, we dragged our jetlagged brains straight off the plane to play three games at Tulleys. It was raining quite heavily when we landed so perhaps this idea ended up being a smart move rather than just a crazy enthusiast's ambitious schedule.

Tulleys Farms started off with haunted house and corn maze attractions and just like many other similar establishments, have expanded into the escape room world. Their cozy lobby with a fire place was perfect for a cold rainy day (in June might I add). From their site:

"Dodge City
Dodge City in 2127 remains a stronghold of the wild west. The constant tussle between the Sheriff and local gunslingers means there’s opportunity abound for some creative bank robbery for those with wits and courage.

As a member of the Notorious ‘Barn Door’ Gang you’ve been caught by the local sheriff breaking into the bank. Locked away with little hope, hired by an unnamed outlaw and facing the ruthless justice of the old west you’re left with only one option.

As the sun sets the race is on to break out, reclaim your supplies, pull off the bank job of the century and get out of Dodge City.

Nethercott Manor
The old manor house is entwined with local legend, the living don’t remember the Nethercott’s, the family’s hay day was long ago. Local folk talked, whispers were heard, rumours began, lights were seen within.

The Nethercott’s are long gone but something remains, an essence, a smell, a feeling, it’s in the fabric, in the walls, under the floor boards … it ticks, it creeks … take a trip into the past, uncover the family’s many secrets and glimpse their fleeting souls?

Mutiny
It's the year of our Lord 1672, and you be right in the height o' the golden age o' piracy…After years of sailin' the high seas, you and your crew have succeeded in your fair share of ambushes, and as a result – your ship is teamin' with bounty.

Yet you're still suffering beneath the cruel wrath o' Captain Starling - a notoriously bloodthirsty buccaneer, and your shipmates have decided you all shall take matters into your own hands. After all… you fought for the gold, so the gold is yours for the taking, aye?

Once the old seadog has retreated to his berth for the night, you make your move. Get in, get the treasure and get out. You won't have long before he starts to stir – and Starling shows no mercy to ANY soul…

Dodge City
One thing you'll notice is that all Tulleys escape rooms have huge and sprawling set designs. Dodge City was their newest release that took place in a western themed world. Although the story was set in the future (year 2127), the environment was predominantly based on a western world of the past and thematically, mostly void of any futuristic elements. The game started off with split groups in a normal setting and then ramped up to a larger world where a splendid space awaited our arrival. The rush of discovering new areas did not disappoint one bit in this game. Just watch your head as you go back and forth between some areas!

As for the puzzles, there were a lot of things to do. We rarely ever recommend more than four people but extra bodies would definitely help with the amount of parallel puzzle solving needed. There was a lot of searching and careful observation required throughout the game and the more eyes, the better. One of the styles that I enjoy the most fit in perfectly with this room: a ton of "aha" puzzles that kept it a fast paced game with a lot of quick wins. The puzzles were on the easier side so the challenge was the sheer amount of things that we needed to solve.

The theme was also light hearted and the set was bright, in contrast with the darker and creepy Nethercroft Manor game.  Dodge City was Tulleys most robust escape room and you can see the the improvement over their previous efforts in both design and game flow.

Nethercott Manor
The style of this game was similar to Dodge City in that the environment took place in a very polished and large space and the game play was centered around an abundant amount of relatively quick-to-solve puzzles. Nethercott Manor seemed to have have even more things to do than Dodge City which was already an action packed game. The game has enough content for a 90 minute session so we highly recommend bringing as many people as you can to complete it within the allotted 60 minute time slot.

An additional unique aspect about this room was that when we thought we were close to the end, another secret room popped open. This constantly occurred which kept us in the dark of how much we had left to complete. We admired how the game and set unwinded as we progressed and combined with a magnificent recreation of a house made for a really fun experience. The setting was on the dim side (not too dark) and there were some jump scares but the vibe was more creepy and never scary.

Mutiny
This was one of the first rooms that Tulleys opened in 2016 and it was pretty impressive with some large physical custom contraptions. While not as grand as their newer rooms, it was definitely larger than almost anything you could find in London. There were a few cases when we weren't sure if we had solved a puzzle but overall it was an excellent entry level game. Expect to see some nice effects rarely seen in other escape rooms.

Dodge City/Nethercott Manor
The overall experience of traversing the sets while solving so many things was incredible! It's an amazing adventure with splendid custom contraptions and a lot of fun moments.

Mutiny
The really big physical puzzles are impressive and amazing to see for the first escape room creation by Tulleys.

For all the games, there was good amount of tech but also quite a lot of padlocks/keys, which was fine given there were so many things to solve, but there's always that extra magic when a room is void of padlocks.

Dodge City was quite the treat for us and a definite highlight in the greater London area. Nethercott Manor was a close second, perhaps due to the theme as we typically prefer light hearted games. We are happy to award Dodge City our highest rating of 5 gold stars! It's rare to see an escape room with so many things to accomplish in such an immense and wonderful environment!
See their website here: https://www.tulleysescape.com

Disclosure: Tulleys Escape Rooms & Games comped the tickets for these games
Posted by Randy at 1:28 PM