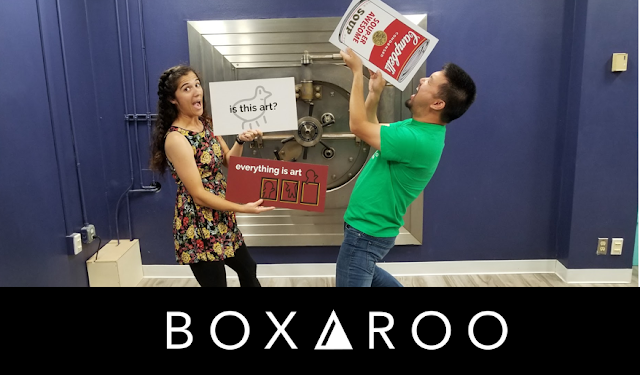 We were fortunate enough that the timing of our Boston trip coincided with Boxaroo's reopening of  their room, the "Magician's Study" after being closed for about a year. In this new location, they also opened up a second adventure, the "Conundrum Museum". We were going to play these rooms as a duo, and given that the max number of players was ten, we knew it would be a challenge. From their site:

"Conundrum Museum
You and your friends take a trip to the museum when something goes amiss... it seems like you've been framed! Lucky for you, you happen to be the world-renowned local detective-in-training. You'll have 60 minutes to solve the mystery and clear your name

Magician's Study
You're invited! Yes, you. Investigate the study of a once-legendary magician Viltore Madom. Your goal is to discover the secret of this mystical place... or at least as much of it as you can before time runs out."

Conundrum Museum
We played a lot of museum themed rooms and set designs were typically a normal white-walled room with some portraits and antiques. While this held true for the Conundrum Museum, there was a fun centerpiece that came into play in the late stages of the game, which was pretty obvious from the start. There was a fun actor driven intro with some nice effects that set the mood and went to show that the little things go a long way.

The puzzles were clever and utilized the surroundings in an intelligent manner. We enjoyed the overarching cohesion between all the riddles that is often not found in many rooms. There was also a "eureka" moment for a late game solution that we had never seen before that delighted us. The technology didn't feel like it was a primary driver but that was because it was so well hidden. We had the chance to have a behind the scenes look and given that everything was automated, there was ten times more tech than I thought there would have been.


Magician's Study
Again, the theme of a study made it easier to create a believable set. There were quite a few nice well hidden surprises that sets this study apart from many other escape rooms out there. We don't mind recurring themes as long as there are surprises or clever devices that spring up along the way and Boxaroo had a lot of surprise elements.

The puzzles were fun and a lot of times we felt we knew exactly what we had to do, to only be fooled but our previous experiences. The game must have been designed to fool enthusiasts because it used common elements that you would find in many rooms but with a different twist on how to use them. We appreciated one of the reveals because of how it changed our perspective on how we saw things. The technology, like the Conundrum Museum, was seamlessly blended into the setting.

Conundrum Museum
The late game puzzle that opens up the final stage of the game was unique. At first we thought, "this probably isn't it" but of course it was.

Magician's Study
All the puzzles that looked basic but actually had a second level solution to them.

We also got a cool scorecard that we loved that mapped out our progression vs. other groups :) 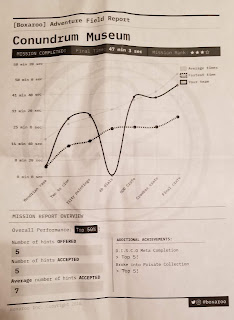 There was at least one puzzle in Conundrum Museum that was tricky because of the use of a very uncommon word. Also, the setting for both rooms were perfect for the theme and well done but they were still simplistic in the grand scale of escape rooms we have played. Also, the scorecard we got had a bug that threw off the stats.

Both the rooms were incredibly fun and we were lucky enough to play them as a duo. We highly recommend playing these rooms as Boxaroo is one of our top recommendations in the Boston area!