The puzzles were smart and a lot of the physical contraptions were custom built, demonstrating great craftsmanship and creativity. Multiple puzzles could also be solved in parallel which made it perfect for our group. Often, 10-player rooms have bottlenecks that leave people with not much to do but that was definitely not the case here. Not only was there a lot to do, there was also a unifying factor in each puzzle that brought the group together as the game progressed. There wasn't a lot of fancy tech but puzzles provided a strong sense of accomplishment when solved.

The decor was immersive and gave us the excitement of entering a medieval castle. Overall the room certainly had a "mom & pop" feel to it. While there were some elements that felt homemade, they were well executed and in a charming way that made us appreciate the time and effort that went into the creation of everything.

The puzzles were complex enough that solving them gave us a rush of excitement and pride. Midway through the game, the team comes together to reveal the next step which is a great way to bring everyone back together.

Overall, everything was solid and if there was one thing that I had to come up with that would make this room better would perhaps be to add more grand reveals.

With satisfying puzzles and great puzzle pieces, everyone had a great time at "Quest For The Crown". The entire group appreciated the creativity of the puzzles and the set pieces.

Winner of a 2017 Escape Rumors Achievement unlocked Medal for Most Creative Escape Room! 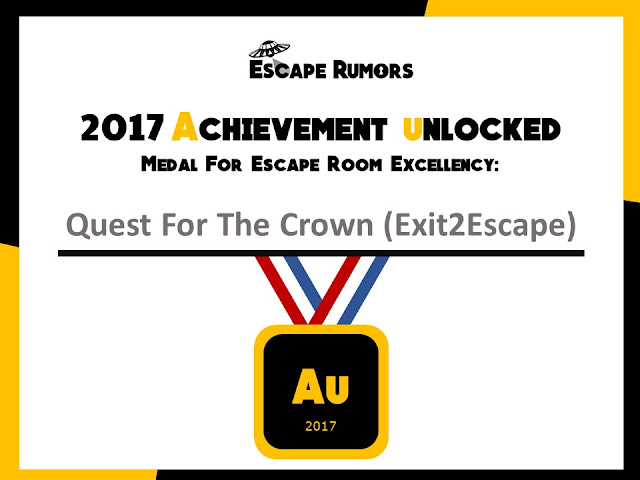