If you are in the downtown LA area there are two popular escape room companies that are in the vicinity: "The Virus: Get The F Out" and "Escape Room LA". Both these public rooms take upwards of 10 people so it may be a craps shoot in terms of who shows up in your game. Escape Room LA's "The Alchemist" is known to be a puzzle centric and challenging room where you only have only 50 minutes to escape. We were lucky enough to play on a Thursday night with only our group of four. From their site:

"An ancient library leads you through a secret passage into a medieval alchemist’s mysterious lab, where you must find the four lost elements of earth, air, fire and water. Unite the elements and unleash the magical powers of the Philosopher’s Stone before the alchemist returns! Will you escape?"

Let's start off by noting that there were a lot of puzzles to work on in this room. Separating the group in half was the ideal way to go (for any sized group) given there were two parallel paths that needed to be traversed. There was an actor in the room and although we heard some enthusiasts didn't enjoy this element, our actor did more observing than anything else and fit in with the theme. The room did not have random scavenging for things as most of the searching was directed. It was clear in terms of what you could or could not do which avoided the confusion of "is this supposed to work or are we missing something?".

There were a few automated triggers but for the most part the room was pretty low tech. However, the puzzles were intricately designed and extremely creative. This was exemplary case of how you don't need technology to create an awesome experience. Puzzles were also of the tangible variety and the use of pen and paper wasn't required for the most part.

The set design was great as you could see from the photo below: 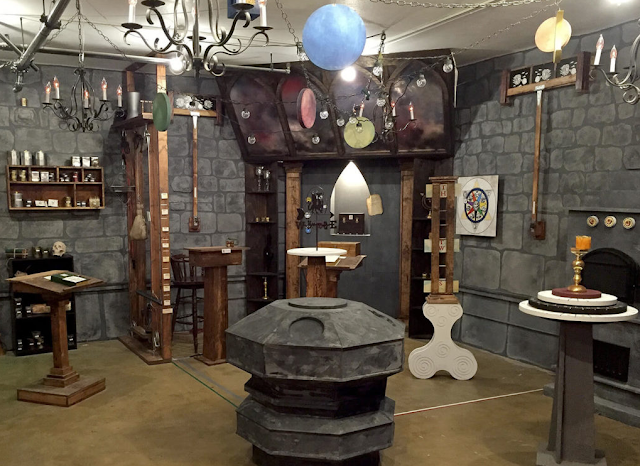 The puzzle where we found out that we had to...right no spoilers. Let's just call it an "aha!" puzzle that was extremely satisfying to solve. This was in fact true on multiple occasions.

I'm going to sound like a broken record but 10 people in this room would greatly lessen the fun factor. The actor was pretty obscure which could be a good thing but we felt that it would have been nice if he had a bigger role in the immersion of the room.

We loved this room and it was refreshing to play something that felt very different compared to the 100+ rooms we have played up until this point. We highly recommend playing this room if you are in the LA area.


See their website here: http://www.escaperoomla.com
Posted by Randy at 9:58 PM