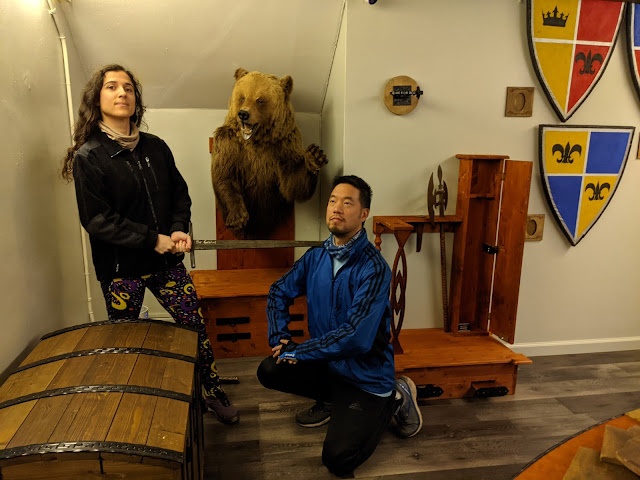 We got to play our first in person escape room of the year at EscapeSF, located in Chinatown in San Francisco. It was such a great feeling to be able to physically touch things in an escape room rather than just viewing it through a computer. We ventured out to play the newly released King Arthur's Legacy and also a Christmas popup, Gingerbread Cottage Escape, that was never released due to Covid-19 shutdowns last year.  From EscapeSF's site:
"King Arthur's Legacy
Ages past and the Knights of the Round Table are no longer in Camelot. The gift of Lady of the Lake is waiting for the hero and Merlin the Magician keeps its secrets. You must assemble a company and get to the Excalibur.
Gingerbread Cottage Escape
Ding! Nothing beats the smell of fresh baked gingerbread cookies around the holidays...except when YOU are the gingerbread cookies. *Kids friendly"

King Arthur's Legacy
The set design in this game was on par with what one would expect in an office space right in the middle of Chinatown, however, the props that were used were great. The swords that were used were custom made from Russia and they were really heavy to lift! There were some neat surprises that we didn't expect and this reminded us of how much we loved playing physical escape rooms. EscapeSF was also the company where we played some of our very first games back in 2016 so it was great feeling to come back. Many of the puzzles were based on observation and ciphers that are prevalent in escape rooms.
Gingerbread Cottage
This game was designed for kids and we were told it was super easy but we loved the Christmas theme and how cute it was! The set was basic, but effective given that it was made for children. Experienced players would get out of this 45 minute room in 15-20 minutes so it's best to play with kids.

King Arthur's Legacy had a fun physical puzzle that fired us up and made our day. Gingerbread Cottage was just really cute and it's hard to forgot the Gingerbread man that you are trying to build. It reminded me of the same character in Shrek.

We felt that the ending of the rooms lacked a grande finale that we often crave from an escape room. Also, the set design could have been more elaborate to provide a more realistic feeling of being in King Arthur's world.

We enjoyed the first in person room we played in 2021 and while the games were not groundbreaking, they were definitely some solid fun.

Disclosure: EscapeSF comped the tickets for this game
Posted by Randy at 2:25 PM