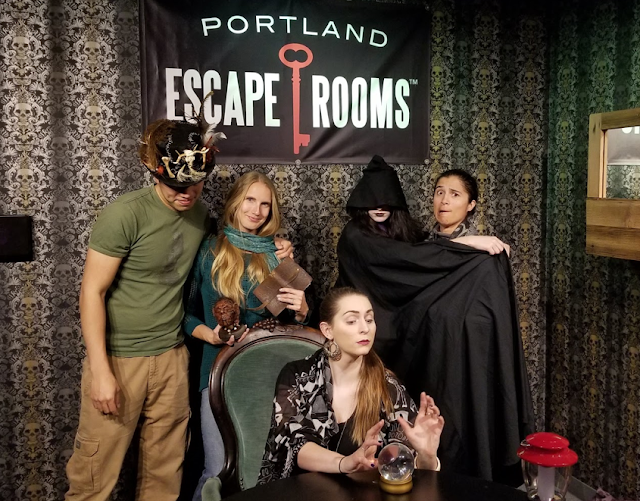 We played two of the six games at Portland Escape Rooms on our first trip to the area. The Steampunk Airship was their new game that not many others have played yet so we were rolling the dice on this one. Normally, the latest room in a location is the best, as the lessons learned from previous rooms helps improve upon the next room although there were a few other times on this trip when this wasn't the case. We chose what we thought were the two most immersive rooms which both had actors in them. From their site:

Steampunk Airship
"Strap on your goggles and prepare for adventure as we transport you to another world of steam and gears! You and your team will become crew of the Undaunted, a famous air ship that stands against the devious Allied Industry Corps. Can you thwart the Corps. and fly the Undaunted to safety in this new choose-your-own-adventure style escape experience, or will you fall from the sky? (age 12 and up, adult participant required for players under 15)" 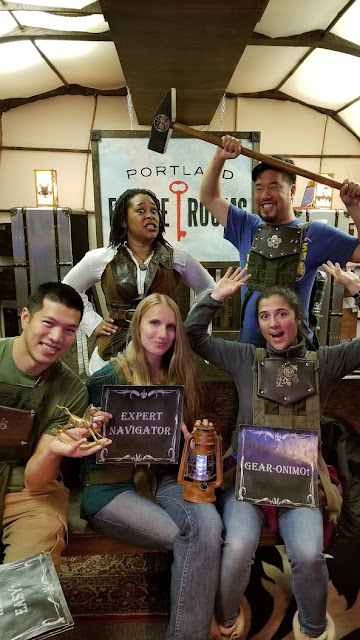 Puzzles, Technology & Set Design Steampunk Airship
The game really worked hard in immersing you in the storyline. The captain we had was fantastic and she was completely in character even before we started the adventure. Upon entering the room, we noticed that the decor fit the theme well. There were some rough ends that looked patchy but then I thought, isn't that what a steampunk type of ship would look like? It was also one of the larger footprint games that we played in Portland, only second to Mental Trap's enormous "Death Alley" game which acts as a haunted house during the Halloween season.

There were two parallel puzzle tracks that were of the tangible type. There seemed to be a lot of indexing puzzles and one that was a long process driven task with some finicky tech that looked really cool. The puzzles were true to the steampunk universe, with fancy mechanical gimmicks and gears everywhere. The manner in which each puzzle helped you inch towards the final goal was refreshing. There were a lot of things that looked like puzzles that were just part of the set design, but luckily the Captain let us know that so we didn't spend much time on red herrings.

Madame Neptune's Voodoo Curse
Just like the Steampunk Airship room, the actress that we had was in character the even before the room got started. For reasons unknown, I couldn't help but laugh at her southern drawl (it wasn't bad) which thoroughly entertained me. The decor was great for the setting which wasn't anything out of the ordinary. Once again, the acting was what stood out for this room.

There was a reset mishap with a key that the actress caught and flawlessly rectified a few minutes later while improvising with some more acting and this had me confused until I realized what had happened. The puzzles were diverse with a few riddles that were somewhat tricky but fair. There were some manual triggers from the GM along with some automation  which was executed smoothly.

Steampunk Airship
There were a few nice plot deviations that we encountered that provided a unique spin and really made the game feel like a scene out of a movie. There was a fun contraption that was just eye candy but it felt like such a treat and the theatrics of it all was fantastic. The plot was complex for an escape room and the goal was a lot more involved than simply getting out of the room.

Madame Neptune's Voodoo Curse
Like the Steampunk Airship, the actress interaction was definitely a highlight for this room. There was a moment of surprise in the game that may cause some people to jump.

Steampunk Airship
There were parallel tracks of puzzles but not enough to keep eight people busy. Also, knowing how to do something and taking +5 minutes to do it, kind of sucks the joy out of it. It also sucks out even more joy when you are unsure of something and to test something else out out, takes another +5 minutes to accomplish.

Madame Neptune's Voodoo Curse
While the puzzles were fine, they were very ordinary. The acting was the highlight.

The Steampunk Airship was our highlight of the trip with Madame Neptune a close second. If you are more into immersion and theatrics, both these rooms are highly recommended.