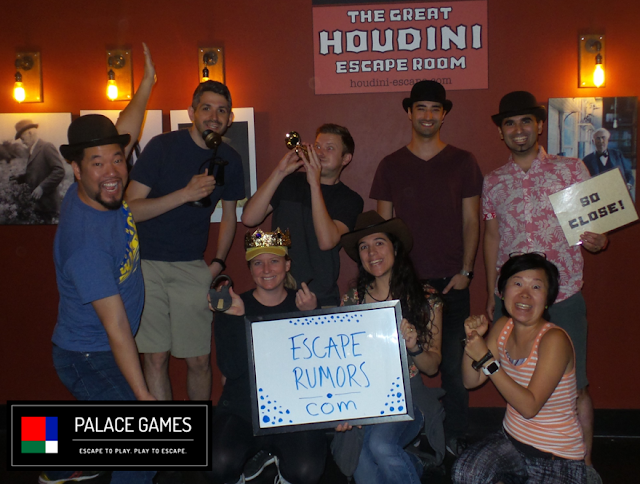 We finally got around to playing Palace Games' original game, "The Great Houdini Escape Room". We played "The Roosevelt Room" last year and despite the puzzles being average, the automation and grand reveals were enough to hype us up for their first room. We knew that The Houdini Room would probably be less advanced as it was older but we had to experience it for ourselves.

The storyline has Houdini building the world's first escape room a century ago and he challenges eight innovators to escape the room. These innovators include famous icons such as Thomas Edison, Alexander Graham Bell and Charlie Chaplin. There was quite a lot to do so eight is a reasonably good number of people to take on the tasks at hand.

The footprint of the room was on the larger side and there was some nice use of automation in terms of puzzles solving. We liked the tactile nature of the puzzles (there were a few paper puzzles) and this was prominent in both the rooms at Palace Games. One confusing aspect was that some puzzles had to be solved serially while others could be done in parallel. This was not clear to us and cost us some time.

Overall we felt that the room and puzzles were more thematic compared to the Roosevelt room. We appreciated the historical background of the innovators and the link between them and the puzzles. There were not as many grand reveals (likely because we are more experienced now compared to when we did the Roosevelt Room) but there were a few things that surprised us. It really did feel like the room was made to challenge inventors!

Pros: Nice automation, immersive decor, fun back story
Cons: Not as grand as The Roosevelt Room (sibling rivalry)
See their website here: https://palace-games.com
Posted by Randy at 8:43 AM