This is our first review of an escape room board game! Not only are we escape room enthusiasts, we are pretty well versed in European style boards games which are basically games that rely on strategy and problem solving rather than just luck and dice rolls (I'm looking at you Monopoly). Board games that we love include Dominion, Agricola, Battlestar Galactica and Deception in Hong Kong.

The reason why we haven't played an escape room board game until now is because I felt that the point of an escape room was to be physically immersed in an environment. I like large and detailed sets with tangible puzzles and the feeling of being in a movie scene rather than imagining it D&D style. Note that the rating of this board game will be relative to other board games and NOT relative to physical escape rooms as they are completely different experiences. As for as escape rooms go, a good physical room is significantly more unique and fun than a good board game. From their site:

"Spend an evening working with your guests to solve puzzles, unlock hidden clues, and unravel the mystery of the Stargazer’s Manor. Will you and your guests be able to solve the mystery and save the astronomer before time runs out?

The Mystery: It’s 1869 and the town’s well-respected astronomer has not been seen since the untimely passing of his wife. Recently, strange things have been happening at his manor – loud and unfamiliar noises, an unpleasant smell, and smoke billowing from the observatory. It’s up to you and your guests to solve the mystery at the Stargazer’s Manor!"

I was skeptical in terms of how we could get an escape room feeling from a box but the feel of the game is actually pretty good. There are five sealed envelopes, each containing a "room" with puzzles and the mechanics to determine if you solved the puzzle correctly is with the solution wheel device pictured below: 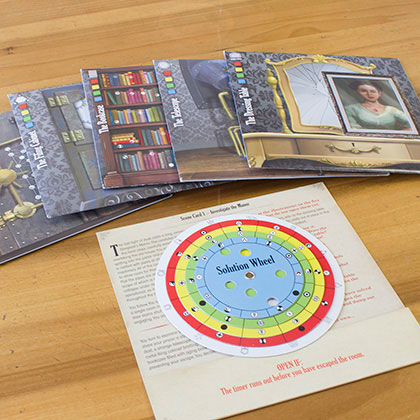 You start a timer for 1.5-2 hours, depending how many players there are and given we were four we were allotted 2h. We finished the game in about 1h10 but had a lot of fun. It exceeded our expectations and like a typical escape room this is a single use play. We felt the puzzles were clever and well designed and even more fun than most paper puzzles in physical escape rooms. There is one decoder in particular that was assembled as part of the puzzle solving and was cool to use.

There was more text than I would've expected from a game but I guess it's necessary when there isn't a GM or someone else conveying the story to the audience. A lot of the puzzles have to do with assembling jigsaw pieces which can be done cleverly but also at the end of the day isn't that unique.

If you have an hour or so to kill and don't have a physical escape room nearby, then it's definitely worth playing this game. If you can get it around the $10 price point on special, it's a no brainer but it isn't even that expensive at the regular price of ~$20.


See their website here: http://www.thinkfun.com/products/stargazer
Posted by Randy at 9:04 PM

Email ThisBlogThis!Share to TwitterShare to FacebookShare to Pinterest
Labels: Board Games Reviews, Escape The Room, ThinkFun