Written by Matt Neal: Southern California has a few things going for it that produce some amazing rooms. A huge population and endless stream of tourists keep the customers coming. The film, theme park, and haunt industries provide an amazing talent pool to pull from and inspiration to dive into. Well established escape room brands keep delivering amazing new experiences, driving competition higher and higher.

The amazing rooms and huge market, however, have brought quite a few “me too” rooms, popping up to try to make a quick buck. So, on a quiet Sunday, when two new unknown rooms popped up having just opened without any buzz or fanfare and a complete lack of reviews to be found, we knew we were taking a gamble with either. A flip of a coin and we were off to visit the Hidden Passage in North Hollywood to face the Pharaoh’s Curse. From their site:

"One morning as the Ancient Nile Breaking news was broadcasting a story about the Kings lost tomb, it was found by a couple of archaeologists! Upon the discovery the Tomb opens and the King awakens, raged, and is trying to escape his tomb to bring darkness onto all of Egypt as he wants to avenge his death.

The only way to shut the tombs door is from the inside. You and your fellow archaeologists did so and now you were stuck inside the tomb and need to find a way out. As you were wandering around, you step on a trap which triggers a countdown of 60 minutes for you to find the kings tomb and escape before you are trapped in the chamber for all of eternity. Will you make it out?"

Make it out we did and we were amazed at the gold we found inside.

Stepping through the front door of the building transports you to an Egyptian tomb. The large stone brick walls, the carved hieroglyphics, the reliefs on the ceiling; the set design is amazing and that’s just the lobby. Inside the room itself, the set design and detailing bring out your inner Harrison Ford as you explore the tomb. Speaking of exploring, there is a huge amount of space to experience. The owners easily could have made the room half the size and it would still be larger than much of the local competition. Instead, they opted to make use of their space in such a way that gives the excitement of amazing reveals, over and over again.

The puzzles here cover the gambit from technology infused puzzles that live up to the immersive experience that the set provides to a few that were forgettable. While none of the puzzles were completely mind blowing, there were several with twists to them that we’ve never seen before which provided that great “aha!” feeling when we worked through the twist. Many of the puzzles fit the theme perfectly but there were a few that just don’t quite have a place in an Egyptian tomb. They’re not bad per say but they don’t live up to the rest of the experience. 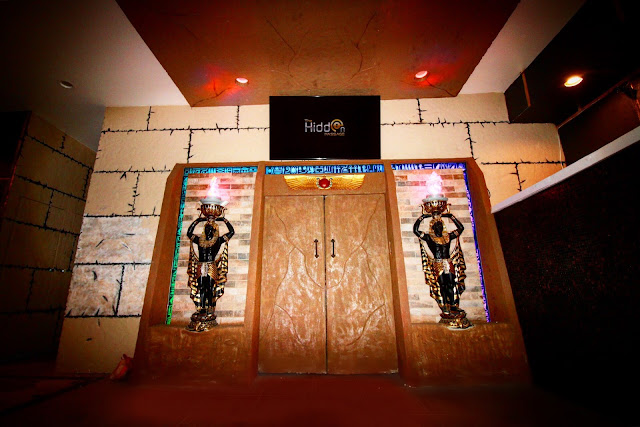 No matter how amazing the set design, quality of the puzzles, or creative the story, a great room can quickly turn into a miserable experience if the customer service is poor. Likewise, an attentive GM can squash a frustrating hurdle before it ever becomes a problem. Our experience here was definitely the latter. At the start of our time in the room, the background music was pretty loud, making communication a bit difficult between separated areas. This communication challenge started to really frustrate one member in our party. Fortunately, they have the rooms wired for audio as well as visual. They were able to pick up on the frustration and adjusted the volume without prompt, before asking if we wanted it off altogether. Frustration squashed instantly. It’s the little things that can make an otherwise good experience great.

After escaping, we spent a while talking with the owners about their room. My first question was “what room did you work on before this?” Shockingly, the answer was none. The owners are newcomers to the escape industry. Further, they are newcomers to building sets. How this quality of set design came from a group without any experience is beyond me. There are a few places, however, where the inexperience peaks through and keeps this from being flawless. As mentioned, there are a few puzzles that fall short of the bar set by the rest of the room and left us wanting more. Also, the construction materials used for some of the elements were already starting to show some slight wear when we visited and are unlikely to hold up to the abuse that the general public can deliver. These are issues that are easy for the inexperienced to fall into, but fortunately, are easy to improve with experience.

There is, however, one elephant in the room we need to talk about; the price. We found the room on a discount site commonly used by escape room businesses for an extremely reasonable $25 a person. At the time of this review, they’re asking closer to $50 a person on their website. This is a fantastic room, but it’s not $50-per-person fantastic. I suspect that they intend on using the discount sites as their main source of customers and this listed “MSRP” is there so they can show a big discount.


See their website here: https://www.thehiddenpassage.com
Posted by Randy at 8:22 PM