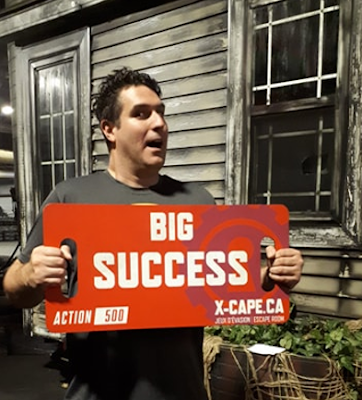 This post was written by Melanie and Jason, the latest contributors to EscapeRumors.com! This duo will rock your world with their reviews and help you find which rooms suit you best!

Melanie is an architect and became an escape room enthusiast this year! Having an eye for creativity,  details, and construction, she offers a very interesting perspective on the quality that each room offers.

Jason is a chartered accountant and his skills with numbers and puzzles allows him to explore and analyze rooms with a different point of view.

It is important to mention that all the escape rooms in the Action 500 Montréal location are constructed from storage containers. The games are either half the size of a container or the full size. Either way, the physical space of the rooms are SMALL. They also have air conditioning units hooked up in the rooms because it can get pretty hot inside!

When we played the games, there were no camera in the rooms so hints were given by the GM who basically popped in to see how we were doing every 15 minutes. It was not thaaaat bad, but it took a bit away from the immersive quality of the experience - just imagine a guy with their Action 500 uniform popping in every few minutes asking if you need hints.

Kidnapping was one of the newer themes (horror) that opened in the Montréal location. Here is a description and video from their website:

"It’s 1989 and finally time for your big camping party with your friends to a cabin in the woods. As soon as you arrive, you find out a legendary mass murderer has  escaped from prison and turned your vacation spot into his forest of death.

With a killer outside your cabin and stranded without cellphone service, you and your friends must solve clues and riddles and get outsmart a serial killer.

Can you survive the night and reach the police before the killer reaches you?"

The decoration in the room related well to the theme, and we definitely got a creepy vibe. The puzzles were actually pretty good and flowed well. I would say it was a low to medium difficulty and people with less experience will probably be able to get through it. It was mostly lock-based, but there were some other simple mechanisms as well. The big issue was that when we finished the game, the thing that was supposed to appear didn't, so we were not 100% sure if we actually escaped! We later found out that there was an electrical issue that they have to fix. A little bit disappointing and hopefully it will be fixed soon!

There was a scare component in the room that was incredibly memorable!

The ending of the game would have been more obvious if there was no electrical issue. We all wait for that big climax and unfortunately we didn't get it this time around because the video screen was not fully functional.

The room was pretty good, we liked it. Story was creepy and puzzles were decent. We played the game with 6 people, which was way too many. For the physical size of the room and the puzzles involved, 2-4 people is better. I would say that it is a very good room for beginners, but still a fun flowing game for mid-level experienced players.